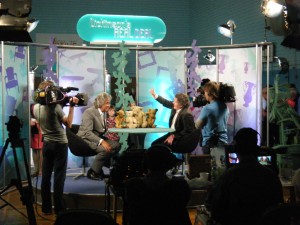 When you think of antiques and daytime television, one of the first images to come to mind will be that of David Dickinson: the celebrity antiques expert who’s as well known for his knowledge as he is his tan!

Llandudno welcomes the man himself later in July for the shooting of his Dickinson’s Real Deal series and all are welcome to come and show their treasures and maybe earn some pocket money while they’re at it. If you’ve ever watched the show then you’ll know that there’s a lot to of money to be made from stuff that can seem worthless and the people of the coastal town are likely to turn out in force to see if they can wrangle a couple of extra quid out of the dealers.

The idea of Real Deal is that a dealer will offer an amount of money for someone’s antique who can then choose whether to accept it or take it to auction. This is when the real fun begins as the bartering that goes on can go right down to the wire! David will often give members of the public advice on what to do and it’s a great midday watch if you’re ever lucky enough to get the day off work.

You too can take part and maybe get yourself a real deal when you turn up at Venue Cymru this 26th of July at Venue Cymru. The location often plays host to be many great events, activities and famous face all year long and David Dickinson’s Real Deal is sure to make a big splash.

Entry is free, meaning that you don’t have to pay a penny to get in and can walk straight into the fun. There will also be an event in Llangollen on the 21st of July but if you are wanting to attend either event, be sure to contact the team at: dickinsonsrealdeal@rdftelevision.com