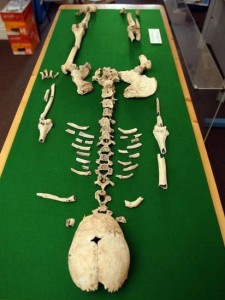 We like to keep you updated on all kinds of news to come out of Llandudno, from the family friendly to the slightly strange. This recent story might just fall into the latter category.

Over 100 years ago, the body of a woman from the Neolithic era was found on the Little Orme in Llandudno. Since 1891, the skeleton has been the subject of much debate and intrigue in the world of science and has even been named “Blodwen”, meaning “white flower” in Welsh.

Her remains date back to an estimated year of 3510 BC and she is believed to have died during her late 50’s or early 60’s, no mean feat for that era. After being loaned to the Bacup Natural History Society for many years, Blodwen looks like being on the verge of coming home to the Llandudno Museum.

The skeleton has previously been loaned to the museum on two occasions but after a local student showed a lot of interest in the subject for a film, the steps are being taken to bring her back on a permanent basis after plenty of negotiations.

Dr Sian James from Llandudno Museum said: “The recent rekindling of the story has come about from the interest in the subject by Paul Lydiate, a masters student making a film about the skeleton called Bones of Contention.

“Both societies have visited each other and a productive relationship and discussion regarding the skeleton has resulted.

“On the two occasions Blodwen has been loaned to the Llandudno Museum, the last being in 2010, she’s brought cultural, historical and economic benefits to the town.”

Before becoming a popular tourist draw, Blodwen is believed to have been a stout and powerful woman who was looked on as a village elder – living to her age was uncommon in ancient times and so she would have been respected for that. As well as suffering from arthritis, it is also suspected that she had secondary cancer at her time of death.

This entry was posted in Local History, Local News. Bookmark the permalink.