Why has there always been settlement at Llandudno?

Before Llandudno’s Victorian legacy there had been people settling in the area since Neolithic times, what possible reason could they have had for settling along this odd crop of land? Well, to find the answer, you need only look up. The giant limestone headland known as the great Orme is the sight of what is currently believed to be the world’s oldest mine.

Who dug out these mines? Well the answer isn’t as simple as that, the excavations have a history which spans millennia.

It is believed that the ancient copper mines of the Great Orme are over 3,500 years old.

Our story begins in the Neolithic period, the mine was excavated by bronze-age miners with nothing but stone and bone tools. For reasons unknown, these original mines were abandoned in 600 BC. They were left for a long while, however, this was not the end of the Orme’s tale. The Roman Empire was ever expanding its reaches, even to the island of Britannia. The romans reopened the mines during their occupation of Great Britain, but then it once again stopped. The mining would not reassume for a long time, until years later; in 1692, once again the Orme was mined, and this went on until the 19th century. It is believed that in various phases in the mine’s history, its copper was exported to mainland Europe.

The site was uncovered in 1987 during landscaping of an area of the Orme, and since then there have been numerous archaeological digs on these sites, making many of these mines now accessible to the public. The Great Orme Bronze Age copper Mines are now open and you can go on a guided tour of the mine, you can learn first hand the secrets of the excavation’s deep history. 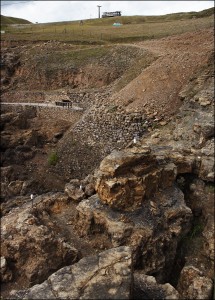 Visitors will be pleased to know that there are some brilliant hotels in the area, for example The Elm Tree Hotel Llandudno.

This entry was posted in Local Areas, Local News, Uncategorized. Bookmark the permalink.