If you’re contemplating whether or not you should visit Llandudno, it could be worth considering that 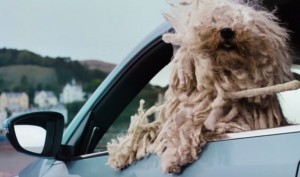 you’ll be following in the footsteps (or rather pawsteps) of some famous dogs.

The German car company Volkswagen recently decided to shoot an advert in Llandudno that featured our furry friends whizzing about the beautiful resort town with so much of its fantastic scenery being highlighted throughout. During September, camera crews (as they so often do) came to the area to shoot the popular advertisement that has over 100,000 views already on YouTube.

With the idea behind the advert being, “there a VW for everybody”, the pooches are seen driving along some of Llandudno’s most beloved sights. The Great Orme received welcome exposure and it’s little surprise considering its breathtaking scale and the gorgeous houses that are situated below it. The promenade also features heavily and it looks like the dogs enjoyed it as much as the people there!

Just a short journey away from the illustrious town, the fun-loving pooches could also be seen veering along Marine Drive near Penrhyn Bay before they were seen gallivanting all the way down Gloddaeth Avenue in the wrong direction.

With Volkswagen due to open an exciting array of showrooms in the town for 2014, Llandudno looks set to be one of the hubs for the superb new financial growth in the car manufacturing industry in Britain after its economic upturns. A spokesperson for VW said they were quite taken by North Wales before the advert was even shot there.

“We chose North Wales because the scenery is stunning and so pretty, and because the dogs were all in this country. We thought using lots of different dogs was a charming and humorous way of getting across the fact that there’s a model of VW for everybody.”

As the dogs have all driven away and the dust has settled, the residents of Llandudno can be proud of yet another big name drawing great attention towards the Queen of Welsh Resorts.

This entry was posted in Local Areas, Local News. Bookmark the permalink.