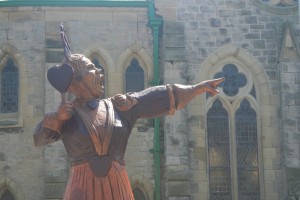 It’s been a long time coming with plenty of speed bumps along the way but the Alice in Wonderland Llandudno app has finally been made available to the public. The wonderful seaside town now has more than a Liddell bit of a connection to the popular Lewis Carroll tale.

The app gives visitors the opportunity to virtually impose Wonderland’s vivid characters into the frame with them and it’s believed that this is the first interactive app of its kind in the United Kingdom. The creators and Conwy Council hope to have tourists from all over taking selfies with these fascinating avatars.

August should have seen the launch of the app but a calamitous misjudgement from the local council delayed the official unveiling. The statues, which could be analysed by the app had been painted over, meaning that it couldn’t be recognised. Plenty of scrambling around and one or two embarrassed looks later and the people of Llandudno can now see Wonderland come to life before their very eyes.

Simon Burrows, co-director of Alice in Wonderland Limited, which has co-ordinated the project, said: “People who use the app can look at Llandudno landmarks on screen, while characters from the Alice books tell the story behind them.

“It’s also possible to take a picture of yourself or your friends standing next to the Mad Hatter, the Cheshire Cat or Alice herself.”

Company director Barry Mortlock said: “I’ve lived in Llandudno for 36 years now, and it worried me that the town wasn’t doing enough in recent years to celebrate its links with the real life Alice.

“The app is now ready for next year’s important anniversary. It has the potential to attract more visitors from overseas, where there’s a huge interest in the Alice in Wonderland stories.”
Graham Rees, Conwy council’s cabinet member for tourism, said: “This will be a huge asset to Llandudno and really enhance what we can offer to visitors.”

This newest development comes at a great time as next year sees the 150th anniversary of Alice in Wonderland’s release. You can bet that Llandudno will be full of fans when it rolls around!