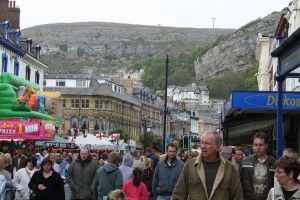 As the curtain falls on a stellar year for Llandudno in entertainment and culture, it’s time to look forward to 2014 which promises to be an even better one for the seaside town.

An event in its first incarnation in 2013, it will be interesting to see how the LLAWN festival for this year tops the one before. A micro-festival curated by specialists, this event was extremely popular as indie artists from all over displayed their work across the town. There was also plenty in the way of live performances which delighted audiences of all ages and the organisers will certainly look to build on their already palpable success.

One occasion which is not just for a great day out but for a great cause is the Llandudno Air Show which celebrated a fantastic array of new and old planes. Any attendees for 2013 will have revelled in the image of a Spitfire and Hurricane flying together and with a majority of the proceeds going to various charities, you may even see a fleet of planes in the skies this May.

It’s hard to compile a list of all top events in Llandudno without including the mammoth Llandudno Victorian Extravaganza. The undisputed king in family entertainment for North Wales, this occasion which takes place all over town has get involved with. There are fairground rides (some not for the faint-hearted), stalls and all kinds of acts popping up throughout the weekend and 2014’s edition is only bound to be bigger and better.

Although not strictly in Llandudno, the Gwledd Conwy Feast in October is just a 5 minute drive away and is well worth the short journey. Tuck into a cosmopolitan mix of food, drink and fantastic live events as you celebration the cultured side of North Wales in style in this historic town. 2013’s feast saw record attendees despite some driving rain and its popularity is a trend that’s unlikely to buck any time soon.

This is only a small sample of some of the fun you can enjoy in Llandudno over the coming 365 days and for all new events as they’re announced, make sure you check out Visit Llandudno for all the best.

This entry was posted in Activities, Attractions, Local News. Bookmark the permalink.