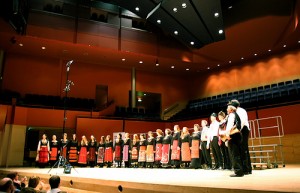 November, a festival that has been evolving over time and in its 25th anniversary for 2013. It can only be the North Wales Choral Festival, a fantastic weekend of music for the whole family.

Participants range from the young and old in a variety of different competitions which include youth, male voice, ladies, mixed and barbershop. With a generous cash prize available to the winner, there is sure to be an electric array of fantastic choirs each determined to sing their hearts out. The funding is a sign of the dedication to the genre and to enhance the future prospects of local choirs and indeed the international acts who will be attending.

Famous names in the industry are set to light up the town in November with the fantastic Sioned Terry the most recent acquisition to the already bulging line-up. As a mezzo-soprano, she’s enjoyed a great year in her career with performances all over the country and a promising record lined up for release. Slightly more from the left field is Wynne Evans, who most famously plays the tenor for GoCompare’s television adverts. Eager to separate himself from his character, Evans will be headlining the event on Saturday.

Children aren’t typically known for their love of choirs (unless they are in them!) but help is at hand with workshops and talks available to entertain and educate them throughout the weekend. As part of the Schools Day, child choirs will be able to compete with the eventual goal of improving their skills and increasing their passion. The promise of a fine trophy to show off to their classmates will be quite the incentive!

If you’re visiting the area then it’d be good to soak up the atmosphere of Llandudno during your stay. Walk along the North Shore and its fantastic pier, enjoy a Punch and Judy display by the beach or take a seat in one of the town’s famous cafes. Whatever you’re after, Llandudno can provide long after the festival is finished.

There’s only one place to be this year to experience the best choirs and that’s at Venue Cymru from the 8th to 10th of November.

Highlights of the 2011 show available from the official Choral Festival here.

“Choir of the Day” by www.flickr.com/photos/pickton/

This entry was posted in Attractions, Local Events. Bookmark the permalink.