Deganwy is a well established destination in North Wales that has undergone a renewal in the last few years. Brilliantly situated in the Conwy Estuary, overlooking the mountains of Snowdonia and over as far as Anglesey.

It was a major stronghold during the middle ages as a hill fort ‘Deganwy Castle’ 110 m above the town, which, in the 6th century was fortified as the stronghold of Maelgwn Gwynedd, king of Gwynedd. Deganwy appears to have been the capital of Gwynedd at this time, but this was later moved to Aberffraw on Anglesey. It was subsequently the site of a Norman castle built around 1082 and occupied by Robert of Rhuddlan, and later by Llywelyn the Great and Llywelyn ap Gruffudd. Locally the site is referred to as ‘the Vardre’. This was eventually raised to the ground by Edward the First and the subsequent development of Conwy Castle across the river. 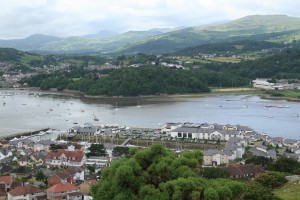 Snowdonia from Deganwy, with Quay Hotel and Marina in the foreground.

With the adjacent villages of Llanduno Junction and Llanrhos, the village is also a major residential area, with high quality properties. The further ‘high end’ feel is enhanced by the new Deganwy Quay development with the exclusively priced properties, Four Star Hotel and Five Anchor rated Deganwy Quays Marina. There are various self catering properties in the area but the Deganwy Quay Hotel being by far the most significant local accommodation.

We recently walked in the upper areas of Deganwy and took some stunning photos of the mountains and Conwy estuary including the Conwy Castle.

The twin peaks of the Vardre, it is thought by experts that at one time fortifications stretched between both rock outcrops.

Deganwy has a railway station on the busy Llandudno branch line with a very regular service (evidenced if you have every been caught at the traffic lights/safety barrier at Deganwy Quay), available on request, to and from Manchester Piccadilly and intermediate stations. The LNWR (London North Western Railway) built at Deganwy a rail connected riverside quay and wharfs, largely for the purpose of exporting slate by coastal steamer. The slate was brought by rail from Blaenau Ffestiniog.

A ‘River Taxi’ service operates between Conwy and Deganwy which is available by calling a phone number on request.

This entry was posted in Local Areas. Bookmark the permalink.