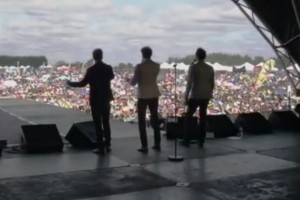 Llandudno has always been a hotspot for great live entertainment and that’s a reputation that is set to be built on even further when Blake roll into town on the 10th of April.

As the perfect antidote to the boybands who are all over the charts in recent times, Blake offer a distinctly grown-up affair that still doesn’t take itself too seriously as they are known to take part in banter between songs – exactly what you can expect at Venue Cymru.

Blake have in fact been around for 7 years and are most famous for being one of few acts of note to be formed thanks to Facebook and two line-up changes later, the boys have gone from a quartet to a trio as of 2013 and currently consists of Ollie Baines, Stephen Bowman and Humphrey Berney.

You may not be able to place the faces to the name but you may have come across them on television during performances on The Alan Titchmarsh Show, Daybreak, Loose Women and also several shows in America. The harmony group is going far, only boosted by their win at the Classic Brit Awards.

To add to their already impressive pedigree, Blake have also performed three times in front of the Queen as well as wowing audiences at Wembley, the Royal Albert Hall and perhaps most impressively of all, showcased their talents to half a billion people in China!

So it’s little surprise that the town of Llandudno is buzzing for their performance in April. Known for offering some of the most eclectic and electric performances, they are masters at various styles of harmony and their pop covers always go down a storm. Venue Cymru will no doubt welcome the boys as they arrive for an intimate session at the seaside venue.

This is a show not to be missed and for as little as £18.50, you can experience an unforgettable night of music from one the best acts around today.