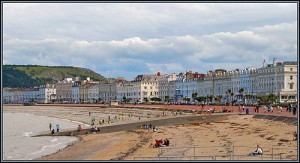 Recent reports have revolved around calls for the Llandudno beach to become a sandy one in an attempt to keep in competition with the coasts of nearby towns.

Currently, visitors and locals can enjoy a mainly stone beach in the historic area in an effort to boost sea defences at the expense of accessibility for all. However, after the recent storm, some of the stones have been washed away which has led to requests from many corners to bring back sand to the thriving coastline, despite the costs which could amount to millions of pounds.

The calls to action have been so immense over the past couple of weeks that a Facebook group first set up by Mike and Alison Shields now has more than 1700 members. People turned up in plenty of numbers to make their feelings known at a recent public meeting near Llandudno’s bandstand.

Alison on the subject: “I’m a local – born and bred in Llandudno – and I spent the majority of my childhood on North Shore on the sand. I know only too well how beautiful the beach was.

“This isn’t just about the townspeople of Llandudno – this is about the visitors that come to visit our town. It’s going to kill our tourism.”

With all this fierce opposition to contend with, Cllr Mike Priestly of the Conwy cabinet said: “Some people were saying we need to bring back a beach and what will hold that in place is old wooden groynes.

“No-one in their right mind is going to give you millions and millions of pounds to do that knowing what evidence there is to keep that sand in place.

“To get that evidence you’re going to have to model what your proposals are. To model those proposals it’s going to cost tens, if not hundreds, of thousands of pounds.”

In late last year and early 2014, the Welsh Governement had agreed to assist with the repair costs for the recent damages to the North Shore and Deganwy Promenade. However, many locals of the town will no doubt be hoping that the powers that be can open their purse strings a little bit more.